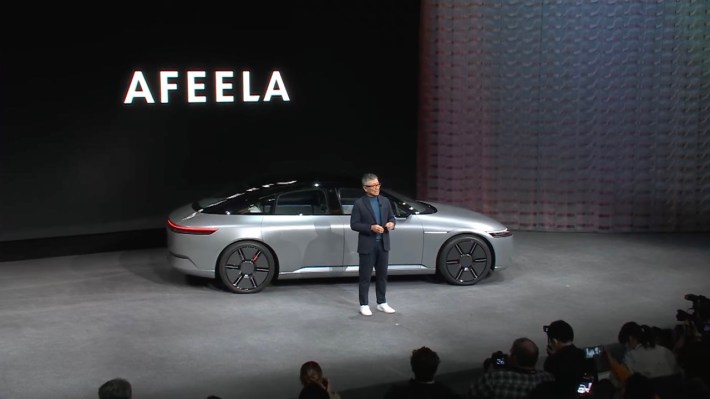 Nearly a year after Sony and Honda shared plans to jointly make and sell electric vehicles, the two companies revealed a prototype under the brand name Afeela.

The four-door sedan was driven onstage at CES Wednesday as Kenichiro Yoshida, the CEO of Sony, talked through the company’s mobility philosophy, which prioritizes building vehicles that have autonomous capabilities and are transformed into “moving entertainment space[s].”

The first preorders of the Afeelas are scheduled in the first half of 2025, with sales to begin the same year, said Yoshida. Initial shipments will be delivered to customers in North America in the spring of 2026.

Sony and Honda have previously said the new EV will be initially manufactured at Honda’s North America factory and will feature Level 3 automated driving capabilities under limited conditions. Level 3 autonomy means the car can drive in situations like traffic jams, but that the human driver must take over when the system requests it.

Sony revealed new details on the vehicle’s design today, including the integration of external media along the front of the car that allows it to interact with other road users and share necessary information.

“We plan on exploring the possibility of how media can create a fun and exciting mobility interaction,” said Yoshida.

The prototype is also equipped with 45 cameras and sensors inside and outside the vehicle in order to ensure safety and security, said Yoshida. The in-cabin sensors will be monitor the driver’s status in order to prevent accidents.

“In addition to movies, games, and music, we envision a new in-cabin experience using our expertise of UX and the UI technologies,” said Yoshida.

Kim Libreri, chief technology officer of Epic Games, said that the most natural way to visualize important data within the car is through intuitive interactive photo real augmentation, which is what Unreal Engine does best.

“In the future, the automobile will become a next generation destination for social connectivity. Not only for the occupants, but also their network of friends and colleagues. It will become a continuum of our digital lives,” said Libreri onstage at CES.

In order to handle all the compute needed for automated driving and advanced driver assistance system capabilities, car telematics and what we expect to be a tricked out infotainment system, Afeela cars will be built around Qualcomm’s system-on-a-chip technology, including their Snapdragon digital chassis.