As much as 40% of all food produced each year goes nowhere near a human mouth, resulting in economic, environmental, and social costs of an estimated $2.6 trillion.

While there are a multitude of social, cultural, and even technological reasons for these staggering statistics, we’ve seen a slew of startups emerge with propositions on how to solve the food-waste problem. Last year, Choco hit the much-coveted unicorn status for software that digitizes the ordering, supply chain and communications processes for suppliers and restaurants. Elsewhere, there are companies serving AI-powered forecasting smarts to help retailers optimize their stock replenishment, while others have built marketplaces for selling surplus or imperfect produce. There’s even a company setting out to transform food waste into food containers.

Another fledgling startup called Kanpla, meanwhile, is focusing its efforts on cutting food waste in one very specific vertical: canteens.

Founded out of Denmark in 2019, Kanpla initially targeted school canteens, serving up software for parents to pre-order food for their kids (children under the age of 13 are not allowed a debit card in Denmark) which gave schools a good idea of how much and what kinds of food to prepare. Today, the company targets all manner of canteens, with paying customers including shipping giant Maersk and Danish brewer Carlsberg, as well as industrial canteen providers such as Coor and Cheval Blanc which serve more than 230 canteens across the Nordics.

In 2022, Kanpla said that its software was used in some 1,500 canteens, and it expects to triple that number this year as it expands into more European markets. In preparation for this growth, the company today announced it has raised €2.2 million ($2.4 million) in a seed round of funding.

There are two core elements to the Kanpla platform. For kitchens, Kanpla offers what it calls an “operating system” for managing their whole canteen from a PC or mobile device, including creating digital menus, support for different payment types, collecting and presenting sales data, and more. Through this, companies can understand what food sells best, allowing them to stock up on the right kinds of ingredients thereby minimizing produce that might otherwise go to waste. 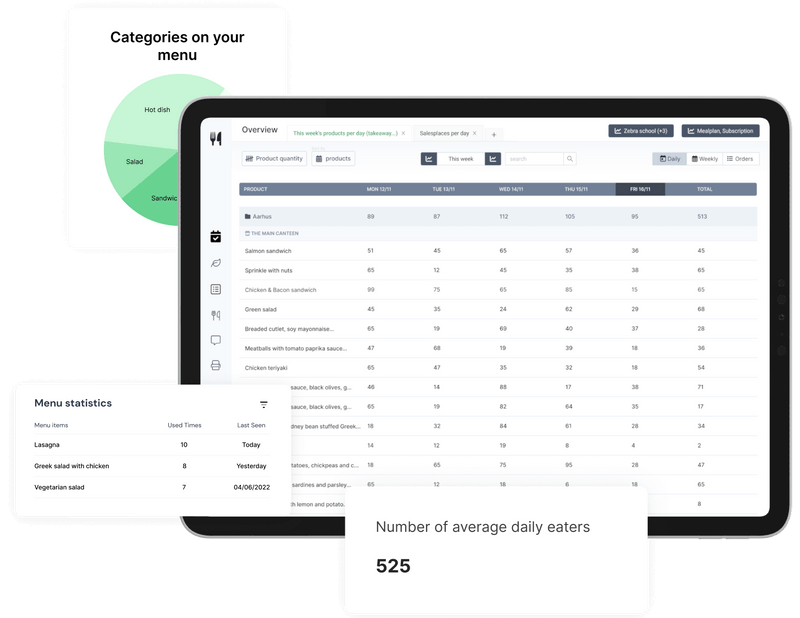 On the “diner” side, users can access a mobile or web app for perusing menus and ordering food, meaning that their food can be waiting for them when they arrive in the canteen. 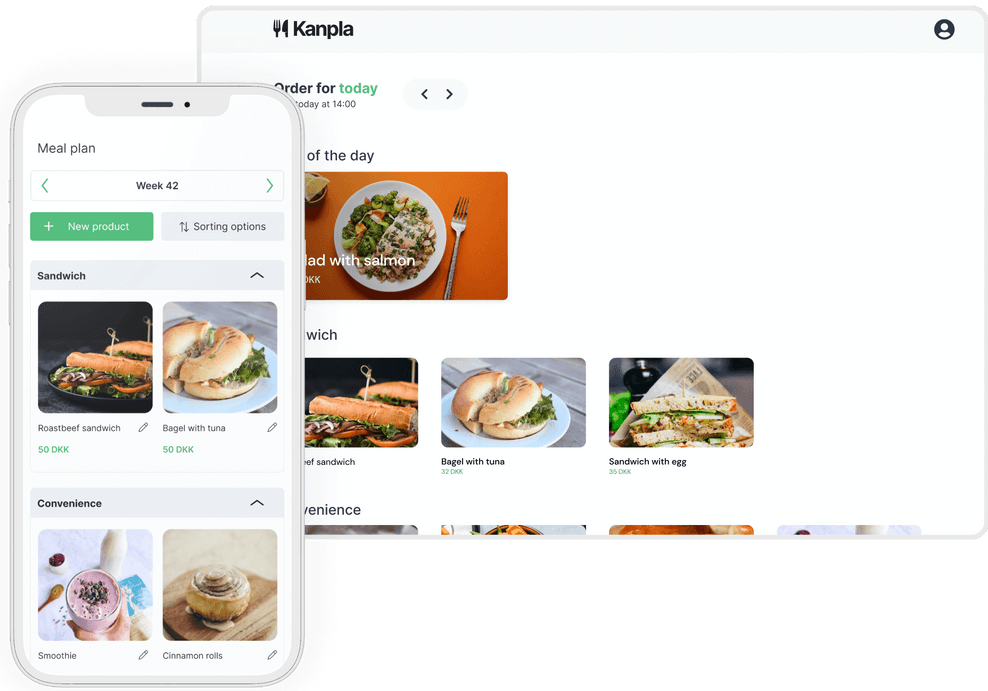 On top of that, the Kanpla platform has features specifically for addressing food waste.

For example, it enables kitchens and canteens to sell surplus food from their lunch or buffet menus as takeaways to guests. Through the admin dashboard, they simply list the amount of food available and the price, and a communication is sent to each Kanpla diner’s app. 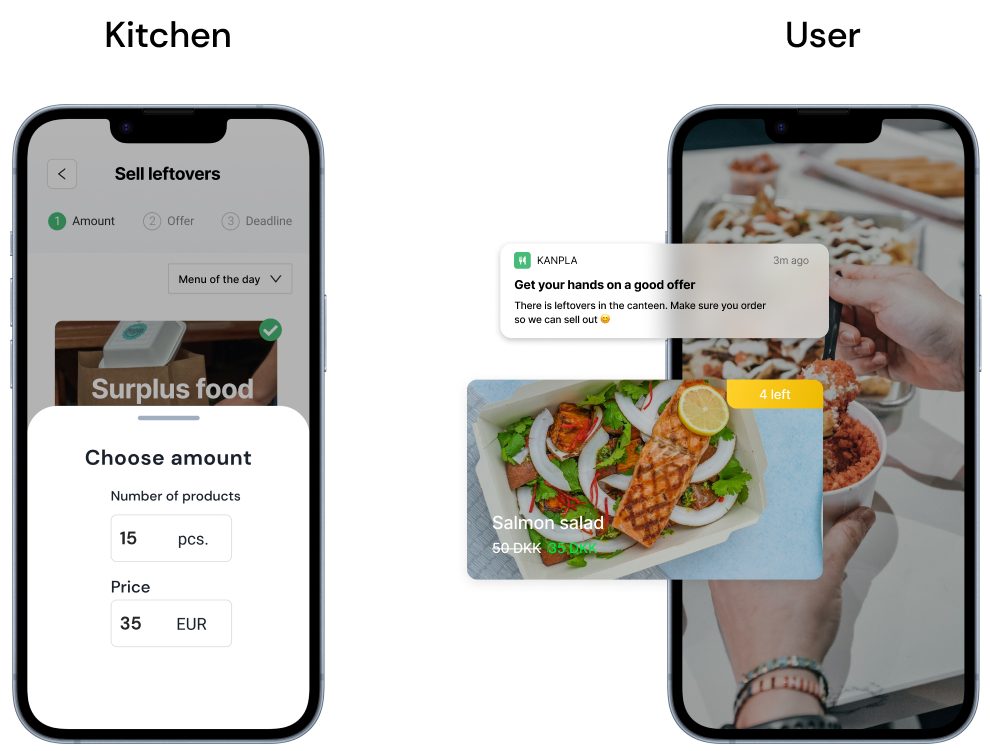 And Kanpla also has a food-waste registration feature, currently in beta, which brings together data such as the number of people entering a canteen and the amount of food that’s wasted across categories (e.g. in production or uneaten buffet food). This requires kitchens to weigh the food before they throw it out.

Perhaps the most curious aspect of Kanpla’s offering is that it’s so narrowly focused on canteens, something that Kanpla CEO and cofounder Peter Bæch said was simply due to his own experiences.

“The idea to target the canteen industry came from our experience at our local canteens,” Bæch explained to TechCrunch. “We saw first-hand a canteen which threw out huge amounts of food at the end of the day. We thought about how we spent half of our lunch-break waiting in lines. These inconveniences led us to dive into the pains, finding an industry that was heavily behind on digitalization, with additional problems of forecasting, limited tools to manage guest relations, and a high degree of manual work for print and billing. These insights became the beginning of our journey to digitalize this industry.”

While canteens undoubtedly share many of the pain points of other eating establishments, each come with their own unique problems and opportunities that require a different approach from a technology standpoint.

“Canteens differentiate from cafes and restaurants by having recurring guests, coming back day after day, giving them a unique potential to connect with their guests” Bæch continued. “Additionally, they have the added complexity and issues due to menus switching daily, and payments working often through hybrid approaches that may include card, invoice, and salary deduction.”

Kanpla’s seed round was led by Netherlands-based VC HenQ, with participation from a handful of angel investors. The company said it will use its fresh cash injection to expand beyond its native Denmark and into the U.K., Norway and The Netherlands in 2023, with plans to extend its reach into the U.S. and other European markets the following year.

Denmark has spawned a number of sizeable tech companies through the years, such as expense management software provider Pleo which hit a $4.7 billion valuation a year ago, while local neobank Lunar achieved a valuation north of $2 billion last year. And then there is, of course, Zendesk which was bought out by a private equity firm for $10 billion back in June.

HenQ partner Jan Andriessen reckons that Kanpla can blaze a similar trail to Zendesk by cashing in on what initially seems like a niche vertical.

“At first, the canteen industry can seem obscure, but it’s a big market with huge potential,” Andriessen said in a statement. “Many B2B software products have blossomed in seemingly non-obvious markets. Zendesk, one of Denmark’s greatest tech businesses, was founded well before customer success software became a well-defined term. Kanpla can be the same, and that’s what makes them the type of B2B business we’re excited to support.”