Crowdbotics, a software development platform with a library of prebuilt app architectures, today announced that it raised $40 million in a Series B round led by NEA with participation from Homebrew, JSV, Harrison Metal and Cooley. The new cash will be put toward expanding Crowdbotics’ enterprise presence, CEO Anand Kulkarni told TechCrunch in an email interview, as well as growing the company’s product offerings and invest in helping increasing its current customer base.

Kulkarni founded Crowdbotics in 2017 after launching LeadGenius, which used AI to crawl the web and discover sales leads. With Crowdbotics, he sought to create a catalog of reusable modules of code to simplify the process of planning and deploying software.

“Because up to 80% of requirements are similar between software applications — things like single sign-on flows or payment gateways don’t vary much between products — customers can build applications using strategies and reusable modules of code that have worked in the past, and focus custom engineering efforts just on the parts of their application that are truly unique,” Kulkarni said. “Customers specify custom software products using our planning engine, which is powered by a growing repository of historical data about how applications are built. Customers can convert these specifications into code on Crowdbotics, typically in React, React Native and Django, and deploy applications into the web, Android and iOS app stores, or on-premise environments, with staging and production workflows included.” 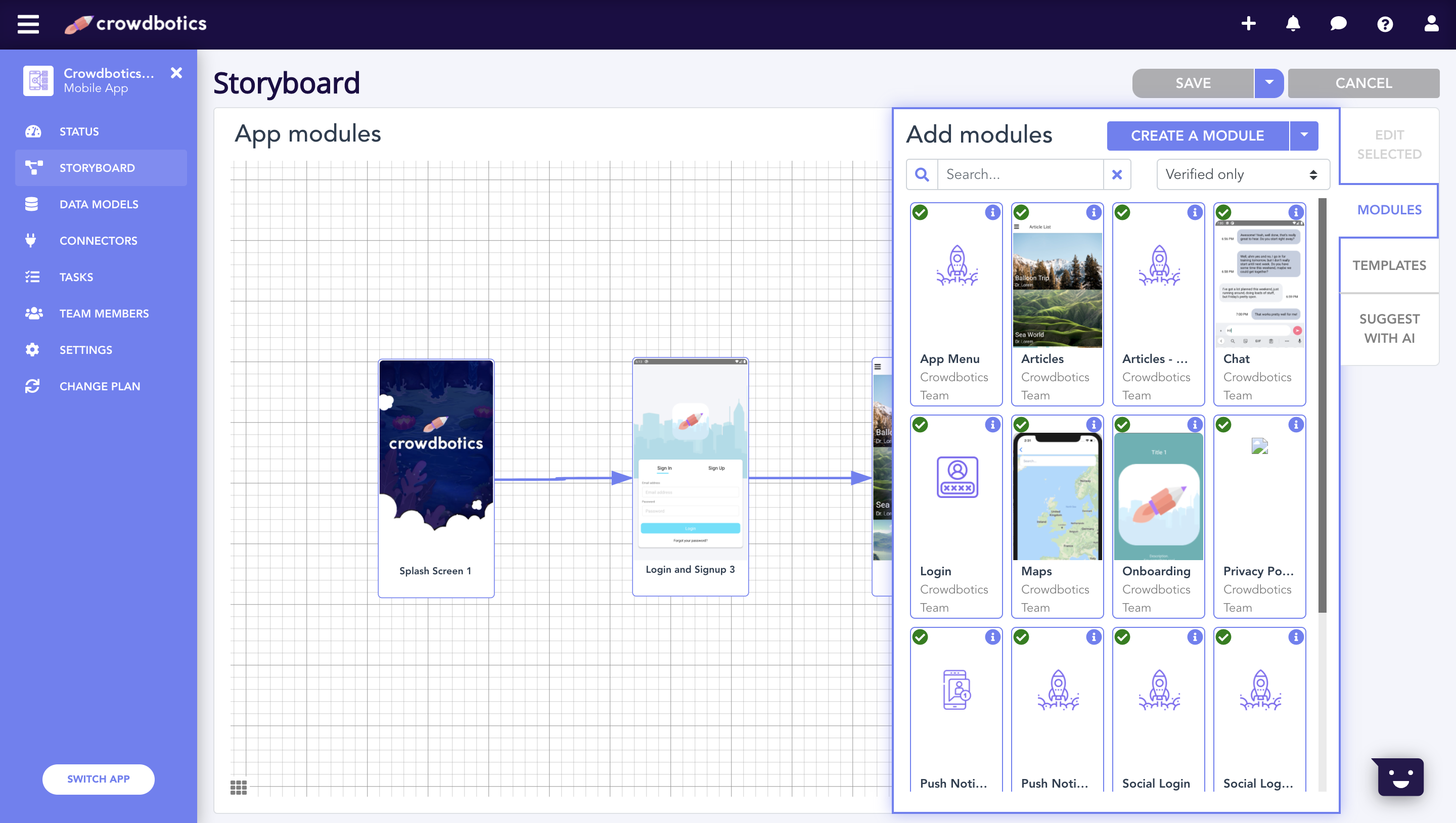 On the surface, the idea isn’t dissimilar to DhiWise, which converts visual app elements into structured, readable and modular code that can be later built upon for scalability. In terms of potential rivals, there’s also Appsmith, which offers an open source platform for internal development teams to build custom apps, and WorkOS and Onymos, which lets developers add enterprise features like single sign-on (SSO) and directory sync to apps,

“We’re displacing last-generation app-building tools like Microsoft PowerApps and Mendix,” Kulkarni said confidently. “Crowdbotics prices based on the number of features in the application irrespective of the number of users … [and] lets developers work directly in open source software development frameworks like React Native and Django, and also lets CIOs set and enforce their own standards for development and security — generating readable code.”

Kulkarni says that most enterprises on Crowdbotics create a private module library on the platform, categorizing their own organization’s reusable components of code plus data. Developers can use these private module libraries to rapidly generate their own IT-approved feature libraries that can be maintained and repurposed across the org. Or they can hire project managers and developers from Crowdbotics’ gig marketplace, paying a monthly subscription for hosting, infrastructure, maintenance, monitoring and more.

“By reusing standardized, well-supported architectures and quickly snapping together modules of interoperable code, customers can build stable apps quickly, or have applications built to their specifications,” Kulkarni added. “By decreasing development time and budget, and facilitating code reuse at scale, while playing nice with an organization’s own standards, there are benefits to the CTO, CIO and other IT department heads that directly impact their performance and their department’s bottom line.”

There might be a bit of hyperbole there. But Crowdbotics, which has raised over $68 million in funding to date, certainly hasn’t failed to nab customers. The startup claims to have over 500, the largest being the U.S. Air Force, which is using Crowdbotics to build flight analysis and training tools. Kulkarni says that Crowdbotics’ revenue has been tripling year-over-year for the past three years and that its 90-person workforce is on track to double by year-end 2023.

“Right now the changing economy is looming over most businesses, and making sure capital isn’t wasted will be a critical concern. Crowdbotics is positioned to help by allowing organizations to be more strategic and efficient with their development resources,” Kulkarni said. “Not only does it reduce overall cost and overhead, but also creates a path for code reuse, ensuring all future development carries the same cost efficiencies … We’ve seen accelerating impact from the pandemic as digital transformation initiatives moved to the forefront of every company’s strategy, and we expect business to continue to grow even in 2023’s market as companies start to look to use code reuse to reduce software development costs and turn to Crowdbotics.”