Bird Buddy, the maker of a smart bird feeder that snaps photos of your bird visitors which are collected in a companion mobile app, is out today with another product for its nature enthusiast and birdwatching community. At the Consumer Electronics Show in Las Vegas, the company is showing off a prototype of its new A.I.-powered Smart Hummingbird Feeder, which is able to take photos and videos of 350 different hummingbird species with wing speeds of up to 60 mph.

Like its original smart bird feeder, the new feeder’s camera is triggered by motion which prompts it to take photos of the bird. Those are then run through an A.I. program to help identify the species, alerting the user to their visitor through the Bird Buddy mobile app.

Originally a crowdfunded startup through Kickstarter, Bird Buddy realized it couldn’t rely on open databases to help it properly identify bird photos. So in 2021, it built around 250 test cameras and sent them out to volunteer Kickstarter backers to help it develop its own A.I. tech. The company collected around 3 million photos, then hired an ornithologist and team of interns to manually process over 2 million photos to train its bird identification A.I. That has allowed Bird Buddy’s system to identify around 1,000 birds — now including hummingbirds.

Bird Buddy also comes with a nicely designed mobile app that gamifies the birdwatching experience. In the app, users build out their collection of birds, track birds’ visits over time, learn about their habits, and share bird photos with the community, giving a bit of modern-day flair to what’s often thought of as an older person’s hobby. 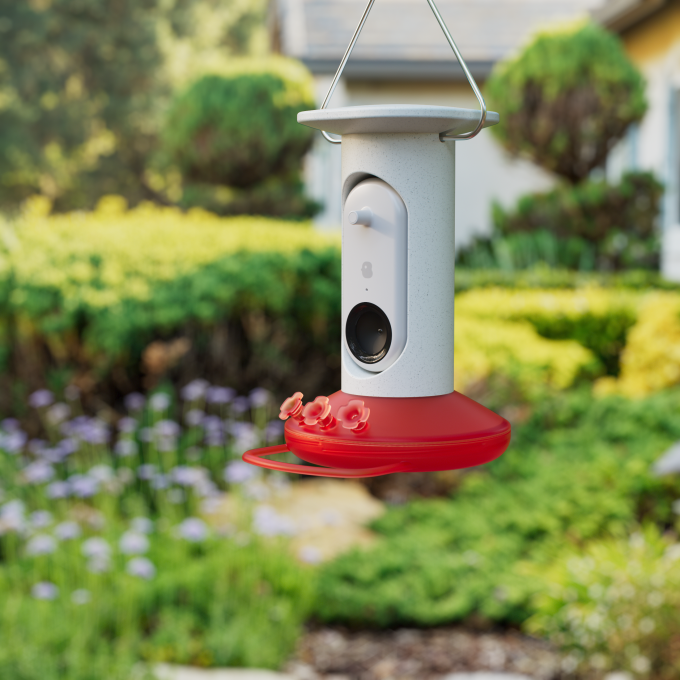 The company says there are now 100,000 users in the Bird Buddy community who have a smart feeder. A new Heartbeat Map website, also launching at CES, lets others outside of Bird Buddy’s own customer base track the bird sightings in real-time.

At CES, the company demonstrated its new Hummingbird Feeder, noting it plans to build the feeder with recyclable and sustainable materials while also offering new features to cater to hummingbirds, like ports with a lily-shaped red flower that provides access to the nectar the birds will eat. The two-part design snaps together with a seal to prevent mold and leaks, but can easily be unsnapped to clean. And like the original Bird Buddy smart feeder, the new feeder features a swappable camera module, optional solar roof, motion sensors, and A.I. tech.

The company’s original feeder is $199 or $269 with a solar roof and has only been shipping since September. The Hummingbird Feeder isn’t yet priced but will be comparable or maybe a little less, we’re told. The company hopes to launch the new feeder later this year. Longer-term, Bird Buddy’s ultimate success may not be from its feeders themselves but from the data it collects.

“We get timestamps, and we know the species and we know — generally — the location based on the town that you put in,” explains Bird Buddy co-founder Kyle Buzzard, in a chat at CES. “We’re building the largest database of bird visits.”

He says the company wants to open-source this data to allow organizations like the Audubon Society and the Royal Society for the Protection of Birds, as well as universities, to have access. The team has also discussed allowing users to photograph and ID birds using just their phones.

In addition to Kickstarter funds the Slovenia- and Kalamazoo, Michigan-based startup raised $8.5 million from General Catalyst and Backed in a seed round last year.